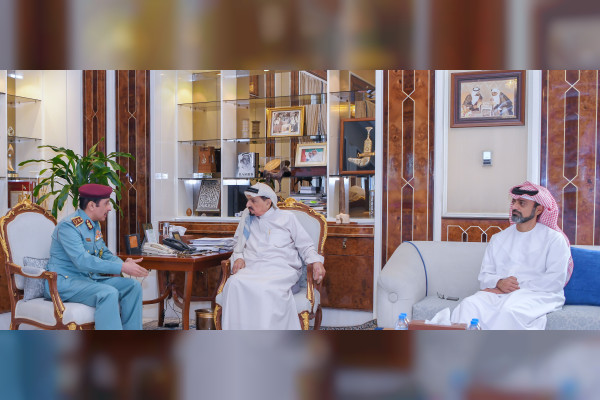 AJMAN, 4th January, 2021 (WAM) — H.H. Sheikh Humaid bin Rashid Al Nuaimi, Supreme Council Member and Ruler of Ajman, has lauded the achievements of the recruits of the Ajman Police, including the global awards they have won, expressing his happiness at their excellence and success.

Sheikh Humaid made this statement today while receiving Major General Sheikh Sultan bin Abdullah Al Nuaimi, Commander-in-Chief of the Ajman Police, and Sheikh Ali bin Mohammed Al Nuaimi, Head of the Vehicle and Driver Licencing Department at the Ajman Police, who won the “Influential Leader Award Under 40” from the International Association of Chiefs of Police (IACP) in the US.

The meeting was attended by H.H. Sheikh Ammar bin Humaid Al Nuaimi, Crown Prince of Ajman and Chairman of the Ajman Executive Council.

Sheikh Humaid stressed that this achievement reflects the quality services and distinguished performance of Ajman Police recruits while congratulating the command of the Ajman Police, represented by Major General Al Nuaimi. He also congratulated Sheikh Ali for the achievement and his perseverance.

The meeting was attended by several Sheikhs and senior officials.