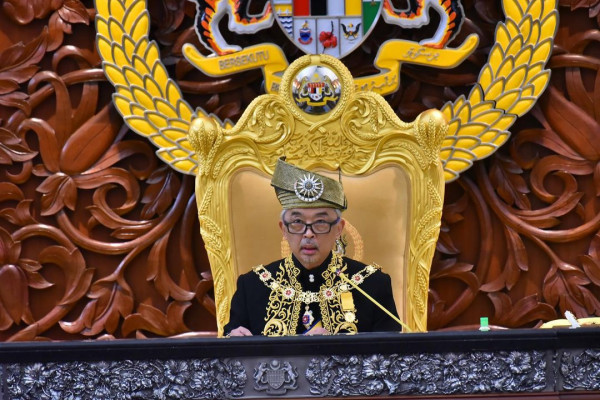 Sultan Abdullah Sultan Ahmad Shah was on a working visit to the UAE last week. He met with His Highness Sheikh Mohamed bin Zayed Al Nahyan, Crown Prince of Abu Dhabi and Deputy Supreme Commander of the UAE Armed Forces, and other senior officials.

“The UAE has demonstrated itself as a friend to Malaysia during this difficult period. For instance, in April, the UAE has been generous to provide medical equipment to assist Malaysia in facing the pandemic,” he said in his first interview with a news outlet from the Arab World.

“In this context, Malaysia looks forward to working together with the UAE in overcoming the COVID-19 pandemic.

“Both countries could explore and intensify relations in the field of COVID-19 vaccine development and strengthen post-pandemic collaboration in the fields of health, education, food security, agriculture, future technology, renewable and clean energy, halal industry and tourism, just to name a few,” he added without giving further explanation about the vaccine development.

Although COVID-19 is a major crisis, “it also has presented us with opportunities, especially to enhance our relations with other countries, including the UAE,” the King added.

Sultan Abdullah, 61, who was sworn in as the King of Malaysia in January 2019, also spoke about the common values between his country the Gulf Cooperation Council (GCC) states, especially the UAE.

“As a trading nation, Malaysia places strong emphasis on its relations with other countries such as the GCC countries, especially the UAE,” he said.

“For decades Malaysia’s Islamic identity has strongly factored into our ties with the GCC countries. We have been engaging closely on issues of importance to the Muslim Ummah [nations].

“Malaysia shares many similar and common values with the GCC countries. With its strategic geographical location, the UAE in particular, has been the main trading hub not only in this region but also in the world for decades.”

Malaysia and the UAE also have been working together at multilateral forums such as the United Nations and the Organisation of Islamic Cooperation.

“Our two nations stand side by side on many international issues,” the King stressed.

Talking about his long-time friendship with His Highness Sheikh Mohamed bin Zayed Al Nahyan, Crown Prince of Abu Dhabi and Deputy Supreme Commander of the UAE Armed Forces, the King believes that “this relationship will pave the way for deeper bilateral relations and cooperation between Malaysia and the UAE.”

“I also hope that it could serve as an avenue to exchange views over regional and global developments of mutual interest as well as bring the people from our two countries closer,” he added.

Their friendship goes back to around 40 years ago when they met as officer cadets at the Royal Military Academy Sandhurst in the UK.

The two royals maintained their friendship after completing their time at the military college between 1979 and 1980.

This was Sultan Abdullah’s third visit to the UAE after his appointment as King of Malaysia.

“I have a pleasant and wonderful experience during each of my visits. I am truly honoured and grateful for the warm and generous hospitality extended to me and my entourage by the leaders [of the UAE], especially His Highness Sheikh Mohamed bin Zayed Al Nahyan, as well as the people of the UAE,” he said.

He added that he would always cherish the interactions with the UAE leaders and people. “I note with amazement that there are always significant changes whenever I visited the UAE. These changes signify tremendous transformation and development experienced by this country over the past decades, thanks to the visionary leadership of this country.”

Religious tolerance is another important value shared by Malaysia and the UAE, the King pointed out. “Similar to the UAE, Malaysia is also a multi-ethnic and multi-religious country. I believe it is important for us to foster peaceful coexistence among the society of different backgrounds.”

The Federal Constitution of Malaysia protects the right to freedom of religion or belief, including religious manifestation by way of professing and practising one’s religious belief, he noted.

“Malaysia and the UAE could work together to promote this value as both countries are a true example of how people from diverse religious backgrounds could live together side-by-side in harmony,” he said.

“I also believe that Malaysian and Emirati policies speak on their own on how we have become a model nation of tolerance and peaceful co-existence.”

The strong people-to-people relations through travel, study and work have translated into a solid foundation of mutual trust and understanding and has been instrumental in the development of the two nations, he observed.

More than 5,000 Malaysians are living the UAE, mostly professionals in various sectors such as the oil and gas industry, aviation, financial and banking sectors and telecommunication.

“The UAE is one of the favoured countries for Malaysian diaspora. This is due to the similarities both countries share, and also because the country [the UAE] provides them with tremendous opportunities for career advancement,” Sultan Abdullah continued.