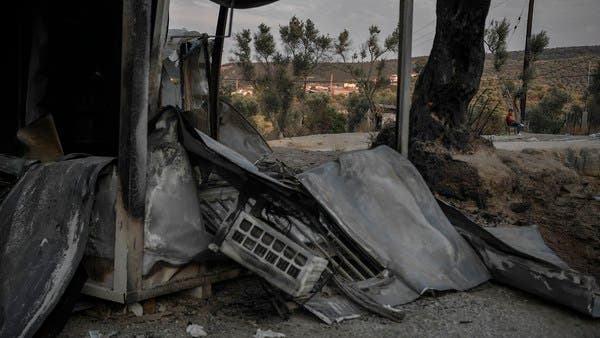 Police on the Greek island of Lesbos have arrested five migrants suspected of setting a fire that destroyed Europe’s largest camp of Moria last week, the minister responsible for policing said Tuesday.

“Five young foreign nationals have been arrested, and a sixth has been identified and is sought,” Citizen’s Protection Minister Michalis Chrysohoidis told state agency ANA.

A local police source told AFP an operation to round up suspects had taken place on Monday on the roadside where thousands of asylum seekers have been sleeping since the camp burned down on September 8.

The sixth suspect is believed to have fled the island, the source added.

The nationalities of the suspects were not disclosed.

Some 12,000 former occupants of the camp on Lesbos island have been sleeping rough in abandoned buildings, on roadsides and even rooftops, after their shelter was destroyed by the blaze on September 8.

The Greek government hurriedly built a tent camp a few km from Moria to house around 3,000 people, but only 800 have been persuaded to enter so far.

Germany plans to take in around 1,500 migrants from Greek Islands

Among them, 21 have tested positive for coronavirus, the ministry said late Monday.

Many have refused to enter the new camp, fearing they would be unable to leave once inside.

Local officials have opposed the camp project and have called on the government to remove all asylum seekers from the island.