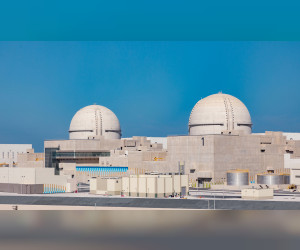 By Krishnan Nayar NEW DELHI, 2nd August, 2020 (WAM) — India’s media outlets this morning extensively reported the commissioning of the UAE’s first nuclear power reactor, the Barakah Nuclear Energy Plant. Print, television, news websites and other media streams highlighted Barakah’s unique place as the Arab world’s first nuclear power plant. "The Hindu" newspaper noted that announcement of the commissioning of the reactor, "coinciding with the Muslim holiday of Eid Al Adha, comes hot on the heels of the UAE’s launch of the Arab world’s first probe to Mars." "The New Indian Express" newspaper carried the story with the headline: "UAE starts up Arab world's first nuclear power plant," while "The Economic Times" had the headline: "UAE begins start up operations at its first nuclear power plant." "The Times of India" prominently reproduced a tweet by Ambassador Hamad Al Kaabi, the Permanent Representative of the UAE to the International Atomic Energy Agency, IAEA, in Vienna. "This is a historic milestone for the nation with a vision set to deliver a new form of clean energy for the nation." The newspaper also carried a collage of photos making the occasion. India TV and Republic TV were among the channels which covered the historic occasion and highlighted a statement by Mohamed Ibrahim Al Hammadi, Chief Executive Officer of the Emirates Nuclear Energy Corporation, ENEC, that "we are now another step closer to achieving our goal of supplying up to a quarter of our nation’s electricity needs and powering its future growth with safe, reliable, and emissions-free electricity." Source