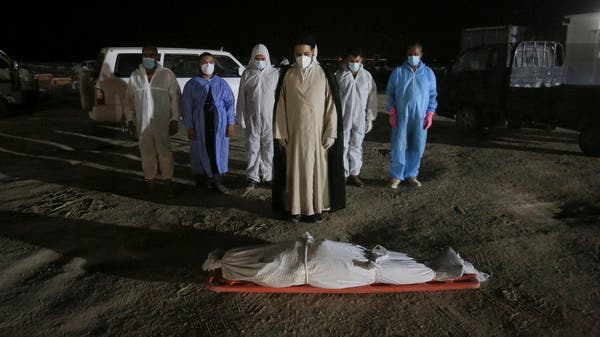 It took Abu Haider and his relatives several hours to dig up his nephew’s grave and exhume the body at a cemetery in the southern Iraqi city of Najaf built especially for COVID-19 victims.

When they had finished, they shrouded the body in white sheets, loaded it on to the back of a pickup truck and set off to re-inter it in Najaf’s old “Valley of Peace” graveyard, the traditional resting place for Iraq’s Shi’ites.

In doing so, Abu Haider is not only reliving the pain of losing a loved one to the coronavirus pandemic that has infected nearly 300,000 Iraqis and killed more than 8,000.

He is also defying an order from religious leaders who consider the new cemetery to be a legitimate burial place.

“We must not dig up Muslim graves, this is clear among religious leaders, in their positions and in their books,” he said.

Abu Haider, a practising Shi’ite, said he had no choice but to defy the edict.

“We didn’t see our dead, the coronavirus victims, we were not allowed to be with them, they were buried quite randomly,” he told Reuters, after driving more than 300 km (186 miles) from Maysan province in eastern Iraq to move his nephew’s remains.

The old cemetery is where members of his family have been buried for generations.

After the outbreak of the pandemic in Iraq, some tribes and religious authorities in different parts of the country refused to bury victims of the coronavirus in local cemeteries, fearing that corpses could still be contagious.

This was the main reason behind the creation of a special cemetery for COVID-19 victims, Abdul Hassan Kadhim, leader of the burial team composed of volunteers from a state-sponsored paramilitary group told Reuters in June.

So far, over 4,000 COVID-19 victims from across the country and belonging to different religious sects have been buried in Najaf’s new cemetery.

In the first months, burials were often done in the middle of the night and with only one family member allowed to attend. Many relatives of COVID-19 victims felt they had not been able to properly mourn their dead.

Following guidance from the World Health Organization that the risk of post-mortem contagion appeared to be low, Iraqi health authorities last week issued a statement allowing families to rebury the bodies of the deceased, under certain conditions.

Despite resistance from the highest Shi’ite authority, dozens of families have moved relatives’ remains from the new burial ground to the old, hoping they will never have to set foot in what they call “the coronavirus cemetery” again.