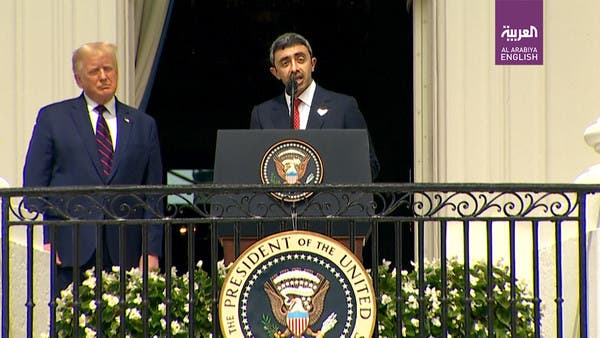 “Your excellency, Prime Minister Benjamin Netanyahu, Prime Minister of the state of Israel, thank you for choosing peace, and for halting the annexation of Palestinian territories, a decision that reinforces our shared will to achieve a better future for generations to come,” al-Nahyan ahead of signing a historic peace deal with Israel during a ceremony at the White House.

The United Arab Emirates and Bahrain signed agreements on Tuesday to normalize ties with Israel, becoming the first Arab states in a quarter century to break a longstanding taboo, in a strategic realignment of Middle East countries against Iran.

US President Donald Trump hosted the White House ceremony, capping a dramatic month when first the UAE and then Bahrain agreed to reverse decades of ill will without a resolution of Israel’s dispute with the Palestinians.

UAE-Israel agreement will include reference to two-state solution: Gargash